They ran the gamut of tests, testing 21 genes. But what I do have on one gene is called a ‘variant of unknown significance.’ Say what?? Yep, that pretty much means they just don’t know yet. Yet.

So we have a gene in our bodies called ATM, and apparently the only thing that showed up on my test was that I have an amino acid change within that gene. My body has substituted Alanine when it’s supposed to be Valine. What does that mean? These two amino acids share similar properties and it’s amino acid substitution and not thought to be located in a functional region of the gene. The lab results stated, “The variant has not, to our knowledge, been published in literature as either a mutation or a benign polymorphism.” So based on the information that is currently available, they just don’t know.

So where does that leave me? Well, I believe in research and that humans are learning more and more about genetics and diseases. I allowed my information to be used for further research. Not just for me, but also for others that have variants of unknown significance. Because at some point it will be known. And it may be something they can use to determine or even fight a certain type of cancer. Or, it very well may be just a random amino acid substitution and nothing to do with cancer.

So, for now, I’m breathing one sigh of relief and focusing on finishing this treatment. 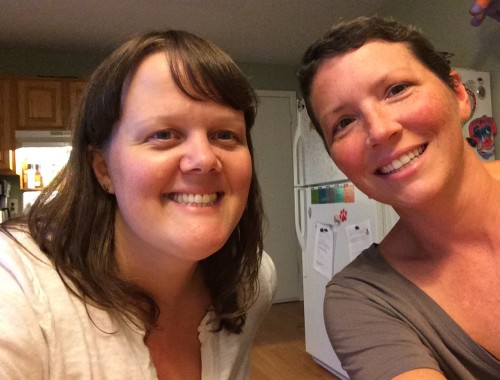 From Carisa – A best-friend’s perspective on cancer